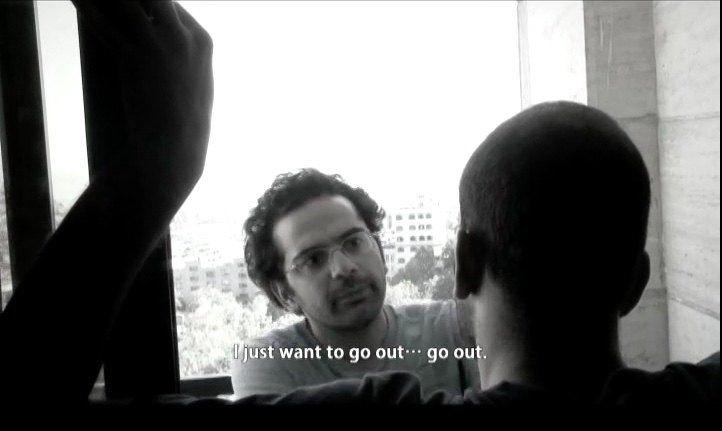 Balcony is a lonely film, a film about loneliness. The main idea of the film comes from a true story. A coincidence that happened during the lonely days of the filmmaker. A day in which he was trapped in the balcony and did the same thing as the main character. At first, the film was going to be made in a sarcastic manner with dark humors, but…

The screenwriters decided to start the beginning of the film as the true story and gradually take steps away from reality.
The Balcony is about human’s endeavor for freedom and breaking the cage of loneliness; although one can find a new space, eventually his condition would not change as much. There are always others who tried their way out of the cage and searched for freedom, but at the end nothing special happened. Symbols and meta reality have helped the filmmakers to convey their thought.

Others who are a metamorphosed type of themselves, or they are tired and surrendered to their destiny.
The hideous look of the protagonist in the final scene, is a representative of failure and a doomed loneliness, as if freedom is sweet dream.

Amin Kafami was born in 1983 at Tehran, Iran
He studied his BA in Law at Allameh Tabataba’i University and received his MA in Cognitive Science at The Islamic Azad University, Science and Research Branch. He has been writing play and film scripts since 2003
He worked as director and writer of “The Ultimate Quality” in fourteen scenes at Faculty of Law and Political Science at Allameh Tabataba’i University and was also the executive producer and assistant director of five short films.